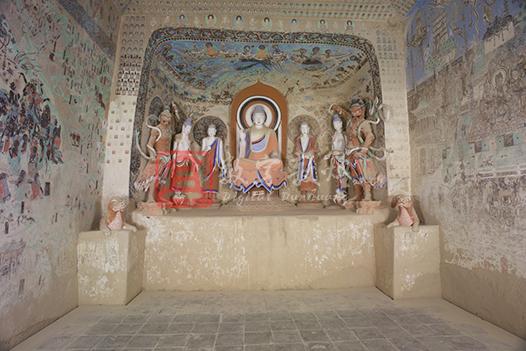 。On the space above the entrance in the east wall is a preaching scene, in which the Buddha sits on a diamond throne with a backrest. His bare feet rest on lotuses. The parasol is very simply flanked by two apsaras and four attendant bodhisattvas sitting barefoot on lotus in graceful postures. To either side of it is a preaching scene of a dhyana Buddha. On the south side of the entrance are a standing Buddha and two bodhisattvas above a row of male donors (blurred) of the Five Dynasties. On the north side is an eleven-headed Avalokitesvara above a row of male donors of the Five Dynasties (blurred). The paintings are in symmetrical composition, and the trees, flowers in them tended to be patterned. 两侧趺坐佛说法图各一铺； 门南中画立佛一铺、菩萨二身，下五代画男供养人一排（模糊）； 门北中画十一面观音变一铺，下五代画男供养人一排（模糊）。 构图左右基本对称，图中的树木、花草等，均有图案化的倾向。

：On the south wall is an illutration of the Ten Wheel Sutra, which is rare among Dunhuang murals. It mainly disseminates the faith in Kistigabha bodhisattva in detail. In composition, it can be divided largely into four areas: I. In the center is a preaching scene and around it are scenes of the assembly on Mt. Khadiraka, beauties above the Buddha; the two hands symbolizing Kistigabha holding a pearl from the clouds, Assembly of the Buddhas from ten directions, and bodhisattvas or celestial gods asking questions to the Buddha, three disciples attending the assembly on behalf of the Buddha, and etc. II. The middle part on the west side, the scenes of Kistigabha saving people from disasters were intended to show that if one recites the name of Kistigabha, he or she will have sufficent food and drink, has his or her desire satisfied, be happy, be free from getting sick, being saved from the prisons, water, fire, or from falling from the cliff to death. III. The upper part on the west side shows various manifestations of Kistigabha (some of the scenes are rendered east upper). According to the sutra, ksitigarbha has fouty-four manifestations and can manifested as a three-headed, six-armed god sitting on a Sumeru throne, a four-armed god sitting on a Sumeru throne, a bodhisattva seated with legs pendent, a Dhyana god, a god talking, a god with palms joined, two gods with palms joined facing a six-armed god, standing images of four lokapalas, a preaching bodhisattva, a dhyana god, a bhiksu sitting in meditation, or a Cakravartin, a common standing khattiya, a naked walking Sudda or Vaisya, or a man, a woman, god, six-armed god holding the sun and moon in hands, running naked man, a lion, an elephant, a horse, a bird, Yama, an officer in the hell, a ghost, a lay person, a fierce dog or a jailer. IV. The east side, stories of Candala are rendered (the Jataka of King Elephant is on the west side), which are mainly are: 1. scenes in the Period of the Termination: three persons hunting in the wild; in a yard, a person carrying a dead animal, two men fighting, and a men bowing to a womon; a bhiksu stretching his arms to a women in a room; in a room a old man sitting on a bed, a person leaning on a stick in front and two maidservants waiting on, looking like treating a patient; a bhiksu descending on a cloud and looking downward above the roof; 2. march of armies: the army of soldiers riding horses to the front, a rider in front led by a layperson and welcomed by three naked people; 3. the Jataka of King Elephant: two elephants on the one side of the mountain and five bhiksus on the other side, the one in the front drawing his bow for a shoot, a large square inscription (obscured) is between the elephants and the bhiksus; 4. stories of King and the criminals: painted in the lower left corner. Inside the towering city wall, there are many people in the temple hall (more than 30 persons). A man rides a horse out of the city gate with a parasol; 5. a Candala annoying the master: below the central preaching scene, a master sitting on a high throne, two bhiksus and two lay Buddhists sitting on two sides, a man standing in the front with half naked chest talking to the master; 6. sin of oil extraction: two women are making somehting; 7. Accumulating merits by giving alms to monks, lighting lamps, building houses, healing patients, reciting sutras, and building (two) pagodas. The lowest paintings are obscured and part of the ground layer has fallen off.

The west niche contains statues of a seated Buddha, two guardian warriors (renovated in the Qing dyansty), two disciples and two bodhisattvas made in the Qing dynasty. On the ceiling of the niche are mainy three assemblies of the Buddha, and on the space among the assemblies are two groups of celestial beings scattering flowers, eight apsaras, parrots and flowers. The west wall of the niche has a nimbus in bas-relief, on either side of the nimbus are four apsaras, two bodhi trees, three halos and two Kalavinka birds. The edge of the niche is decorated with waving vines. Above the niche is a picture of seven Buddhas (with nine attendant bodhisattvas). The paintings on the wall below the niche have been obscured and cannot be idendifed. The north and south sides out of the niche are covered with the thousand Buddha motifs. On the platform on the south side stands a statue of a celestial beast made in the Qing dynasty, and below the platform are images of two bodhisattva painted in the Early Tang (obscured). The paintings on the north side can not be identified. 龛顶画赴会佛三铺，上天宫散花天人两组、飞天八身、鹦鹉、花卉等。 龛壁浮塑佛光，两侧画飞天四身，双菩提树，项光各三个，迦陵频迦各二身。 龛沿画波状卷草边饰。龛上画七佛一铺（胁侍菩萨九身）。 龛下壁画漫漶不清，无法辨识。 龛外南、北侧画千佛，南侧力士台上清塑天兽各一身，南侧力士台下存初唐画菩萨两身（模糊），北侧无法辨识。

The north wall is occupied by the Amitabha sutra illustration. The Amitabha sutra, also known as the sutra on the indefinite life (Aparimitayur-sutra), mainly discribes various majestic, quiet and auspicious scenes in the western pure land. Ten apsaras fly in the blue sky gracefull. The Buddhas and bodhisattvas attending the assembly on clouds represent the Buddhas of the ten directions and the bodhisattvas attending the preaching of the Buddha of Indefinite Life (Amitayus Buddha), which are rendered symmetrically in the upper blue sky. There are five grand halls or pavillions housing four groups, each group consisting of one Buddha and two bodhisattvas. Right above Amitabha Buddha is Suddhavasa, where a cloud is depicted, on which is a two storeyed pavillion with seated and dhyana Buddhas inside. Two bodhisattvas stand on the first floor, and in front of the pavillion is a seven-treasured tree, on either side of the tree is a group of one Buddha and two bodhisattva attending the assembly. The whole picture is of symmetrical beauty. The central part describes the Holy Three Ones: Amitayus Buddha sits in lotus position in the center flanked by Avalokitesvara and Mahasthamaprapta who sits with one leg bent and one leg pendent. The other bodhisattvas sit on two sides. above the pond are platforms and pavillions, in the pond are Kalavinka birds, ducks, incarnated boys, mandarin ducks, and lotuses, on the railings stand peacocks. The pavilion with an east Asian hip and gable roof consists of two storeys, three jian in depth and three jian in width. There is no eave under the flat base of the upper storey. This kind of depiction is only seen among the Early Tang paintings. There is no window or wall between the pillars of the upper and lower storeys, which is replaced by the hanging curtains. The ground of the platform is paved with flowered tiles, similar to the practice of the Tang dynasty. In the middle, above the pavillions on two sides are Buddhas and bodhisattvas coming to attend the meeting. It can be regarded as a outing scene of the Buddha with bodhisattvas. The picture below Amitabha contains two musican bodhisattvas standing on small round rugs. On the two sides are some musican bodhisattvas and attendant bodhisattvas. The painting below is already obscured, and a row of male donors of the Five Dynasties can be seen.

The ceiling center features a large medallion, the outer circle of which is formed by eight flowers with pedicels and eight small flowers. The medallion has a bud in the center surrounded by eight large flowers with petals like swirling clouds. In the corner of the square center are butterfly-like flowers. Around the medallion are decorative borders of connected pearls, twisted vines and half medallions, different than the parasol-like ceiling center designs. It is rendered in green and blue, on a cinnabar, white or brown ground, creating a bright contrast. The draperies of twisted vines and half madellions extend to the four slopes.

Part of the Samantabhadra illustration of the Five Dynasties is survived.

Part of the Manjusri illustration of the Five Dynasties is survived.