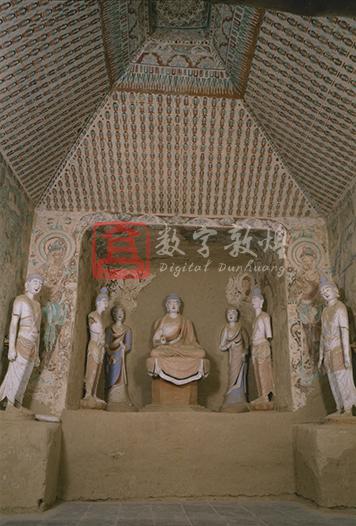 This cave, constructed in the High Tang and renovated in the Qing dynasty, has a truncated pyramidal ceiling and a niche in the west wall. The ceiling center of the main chamber is a design of a large medallion surrounded by different decorative borders, one after another, of the connected pearls, half medallion, scales, and draperies. The four slopes are covered with the thousand Buddha motifs. The west niche which has a flat ceiling contains a central Buddha made in the Tang dynasty, renovated in the Qing dynasty, two disciples reshaped in the Qing dynasty, and two bodhisattvas repainted in the Qing dynasty. Most of the ceiling of the niche is damaged. The north and south sides of the niche each depict a bodhisattva. There is a platform made of adobe on either side out of the niche, on which stands a bodhisattva of the Qing dynasty. The east wall is covered with an illustration of Vimalakirti sutra, which consists of three scenes in the form of the Chinese character "品". The space above the entrance in the east wall illustrates the contents of the Chapter of Buddhist Paradise, the south side deals with the Vimakakirti sutra illustration and the Chapter on the Expediency, and the north side with the scene of Manjusri and the kings, princes and ministers from various peoples and kingdoms. The lower part of the picture is blurred. The north wall is devoted to an illustration of the Amitayus sutra with two side scenes, in which the lower part is lost. The south wall depicts the Lotus sutra illustration, also with two side scenes illustrating the Fables of the Magic City, and the lower part is lost. On the north side of entrance of the west wall in the front chamber are traces of most part of the heavenly kings. The south wall is numbered as Cave 105, while the north as Cave 104. There is an image of Kistigabha on the south wall and an image of Vaisravana on the north wall of the corridor, partly blurred.

An illustration of the Vimalakirti sutra is depicted on the east wall: the chapter of Buddhist paradise is presented in the center, right above the entrance, and Vimalakirti and Manjusri are respectively painted on the two sides. In the picture on the upper part, the preaching scene of Sakyamuni is in the center, below it on the right side is the scene of Ratnakuta and his five hundred sons offering a seven-treasured parasol to Sakyamuni. The north side of the preaching scene is a preaching scene of a Buddha seated in diamond position, which describes the paradise of Xiangjifo Buddha (Buddha of Accumulated Perfume). To the south of the preaching scene is a scene of Vimalakirti going to the abode of Buddha by magic power. On the south side of the entrance, the paintings focus on Vimalakirti and highlight the princes from various kingdoms. On the north of the entrance, the paintings focus on Manjusri and the figures below, including the Emperor and his minister who came to visit Vimalakirti. The paintings at the bottom are blurred.

Most of the south wall is devoted to the illustration of Usnisa-vijaya-dharani sutra, which uses the shape of the horizontal rectangle of the surface and the picture is rendered in a concave form; the preaching scene is in the center, and above it is the heaven represented by Mt. Sumeru. The two sides and the lower part are used for detailed scenes. The central Buddha wears a kasaya which covers his both shoulders and sits on a lotus throne in diamond position. A few beams of light radiate from the Unisha extending like a fan into all directions. Around the Central Buddha are disciples, bodhisattvas and Buddhist monks who are listening to the preaching. The upper part describes the celestial buildings and the figures such as Prince Shanzhu and Indra as well as The dream of Shanzhu, Zhanzhu paying a visit to Indra, and Indra turning to Sakyamuni for help. The west side is used for the scenes of the Introduction in the version translated by Buddhapali from top down: Buddhapali coming from the west to visit Mt. Wutai, Buddhapali kneeling down and praying, Buddhapali meeting the elder manifested by Manjusri, Buddhapali going to Chang\'an and giving his scriptures to the Tang court, and the emperor rewarding him with a lot of silk. The scenes on the left side are about Indra going back to the heaven after being taught the Dharani sutra by the Buddha, Prince Shanzhu getting salvation out of the reincarnation, Shanzhu and Indra visiting Sakyamuni, and Sakyamuni\'s prediction. Below them are the Sun disc which symbolizes the Dharani sutra, the treasured pagoda where the sutra is kept, high buildings, high mountains and people going to pay respect, the devil who protects the sutra, heavenly kings, scenes of making the evil people to be reborn into the heaven by spreading soil and reciting the sutra. The middle lower section mainly contains scenes of the hell where Prince Shanzhu would suffer and be reborn as a beast in the future. Pictures at the bottom are most severely damaged.

The north wall is devoted to an illustration of the Amitayus sutra, in which Buddha Amitabha sits in the center of the preaching scene, and Buddhas of the ten directions coming out from the snake-like beam of rays radiated from the bhru-vivarantarorna-kesa. Around the central Buddha are several worshiping bodhisattvas. The Buddha is flanked by Avalokitesvara whose crown has an image of an incarnated Buddha and Mahasthamaprapta whose crown looks like a bottle. Apsaras are flying above and various music instruments give out wonderful music, though without a performer. There are ponds of seven treasures which are dotted with incarnated children on the lotuses. The side scenes on the west side mainly introduce the story between King Bimbisara and his son Ajatasattu: the Buddha preached to lady Vaidehi, and Prince Ajatasattu imprisoned his parents. Those on the east side are about the sixteen meditations. All the paintings at the bottom are badly damaged and blurred.

The center is a design of a large medallion with decorative borders of pearls, half medallions, scales and draperies on four sides.