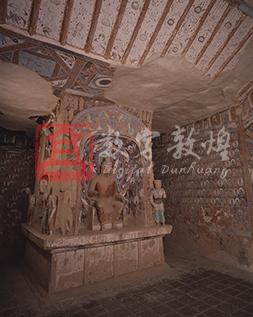 This cave was constructed in the period when the Hexi region was united by the Northern Wei. Originally it was a cave with a central pillar, a gabled ceiling in the front and a flat ceiling in the back. Due to the collapse of the east wall, only a tiny part of the gable ceiling is preserved today. The cave is square in plan with a Han Chinese styled gabled ceiling in the front. On the west slope are celestial beings holding lotuses. The beam is decorated with painted laternendecke motifs. On the flat ceiling are also painted laternendecke motifs, though only two motifs in the southeast corner have survived. One of them depicts a few naked children swimming in a lotus pond. In the outer corner are four asparas. It was surrounded by a decorative border of honeysuckles.The central pillar in the back connects the ground with the ceiling. It has a niche on each of its four sides. The arch niche in the east side contains a statue of Maitreya sitting with legs pendent (whose eyes, nose and hands have been damaged) and wearing a kasaya with the right shoulder exposed. The folds were made by sticking on strips of mud and inscribing natural and smooth lines. The exterior of the niche is divided into an upper level and a lower level, which are respectively covered with ten attendant bodhisattvas. On the top of the niche are four apsaras and Buddha\'s halos. The niche lintel is decorated with reborn children on lotuses and a dragon head on each end. There was a heavenly king alongside each side of the niche. Now there is only one left. This is the only painted statue of lokapala of the Northern Dynasties at Mogao. Above the niche are molded statues stuck to the surface, and below, along the edge of the niche are donors of the Northern Wei (obscured). At the bottom of the base are donors of the Song dynasty (obscured). There other three sides each have a upper niche and a lower niche. The two upper niches on the south and north sides are shaped like the Han Chinese city gates with a bodhisattva statue inside, while the other niches contain a dhyana Buddha statue flanked by two bodhisattva statues out of the niches.On the north and south walls below the gabled ceiling are large-sized preaching scenes, most of which are damaged. In the center of the back part of the sidewalls is a small preaching scene. The extant murals on the west, south and north walls in the back of the chamber are divided into three registers from top down respectively for the heavenly musicians, thousand Buddha motifs, and yakshas. Between the images of the yakshas and the thousand Buddha motifs is a horizontal band of narrative stories which runs through the three walls. On the south wall is the narrative about a Samanera (novice monk) committing suicide in order to obey Buddhist precepts and about the karma stories of an inferior dog. On the west wall is the nine-colored deer jataka, and on the north part of the west wall and the north wall are paintings about the karma of Lady Sumati. These story murals painted on a redish brown ground, focus on the figures and animals, while the landscape, houses, horses and chariots are just used to suggest the background of the story. This is exactly the extension of the traditional Han and Jin painting styles in Buddhist murals.The narrative story paintings in this cave are rendered in a comptetely new style and composition compared to the earlier works form the inception of the Mogao Grottoes. They are the masterpieces of the narrative story paintings at Mogao, which exerted far-reaching influence on the development of the Buddhist art at Mogao.

The wall under the gabled ceiling which is divided into two levels respectively for the paintings of seven heavenly musicians and Vairocana Buddha (most obscured). On the upper part of the west side of the south wall are sixteen heavenly musicians, on the middle part are thousand Buddha motifs, in the center of which is a pagoda with Chinese city gate, in whch stands a Buddha. On the lower part starting from the east side are respectively the karma stories of a novice monk committing suicide,and of an inferior dog. Below the story paintings is a decorative border which separates the story paintings from the lower row of yaksha images (obscured). The south wall is painted according to the Sutra of the Wise and the Foolish,which is a representative painting of Buddhsit precepts. The story starts from the east and develops westwards, including the following seven episodes: 1. An elder sent his son to be a novice monk and learn from an old monk; 2. the monk asked the disciple to beg for alms; 3. a young girl opened the door to welcome the novice monk; 4. the young monk committed suicide and the girl was in sorrow; 5. the girl told everything to her father; 6. the girl\'s father paid in penalty the king; 7. the young monk was cremated and burided in a pagoda. The west section on the south wall tells the story about a dog. The story goes this way: once there was a inferior dog, because it was kind to a bhiksu, it was reborn as a bhiksu. It consists of two episodes: the dog licking a bhiksu and it asked to be a novice monk. This episode has been blackened due to the sootiness.

On the upper part are images of sixteen heavenly musicians, below them are the thousand Buddhas in the center of which is a preaching scene, and at the lowest part are narrative story paintings of the Nine-colored Deer Jataka, which consists of eight episodes. The story begins from two ends and ends in the middle. The episodes are: 1. a man fell into the river; 2. a nine-colored deer saved the drown man, devadatta; 3.devadatta knelt down to thank the deer; 4. the queen of the kingdom wanted to capture the deer; 5. devadatta told the king where the deer lived; 6. the king led his army to hunt for the deer; 7. A crow awoke the deer; 8. the deer told the king about devadatta. The jataka tales are stories about Sakyamuni as a bodhisattva in his previous life trying to enlighten the human beings and spread six perfections. It was painted according to the the Sutra on the Nine-colored Deer, and the airs and inner emotion of each figure are vividly rendered, highlighting the Buddhist main idea on karmic retribution.The horse in the painting was depicted in both realistic and exaggerated styles, looking dynamic. The north section on the west wall (and together with the part on the north wall) is the karma story of Lady Sumati according to the Sutra on Lady Sumati translated by Lokaksema in the Three Kingdoms Period, which consists of 14 scenes, and the first three episodes are on the west wall: 1.Lady Sumati lying in bed and inviting Buddha by burning incenses; 2.One of Buddha\'s disciple coming with a span on back; 3. A novice monk coming by riding five hundred flower trees.

The arch niche has a Buddha seated with legs pendent. Out of the niche on the north side is a statue of a lokapala. On the interior walls of the niche are a nimbus formed by flames and incarnated boys, and on each of its two sides are images of ten bodhisattvas and two apsaras. The niche lintel in bas-relief is decorated with incarnated musicians. The moulded niche lintel has a dragon head on each end and the pillars each have a parrot on the top. On the two sides are two bodhisattvas and four incarnated boys as well as one moulded small Buddha statue altogether. On the edge of the niche are donor figures of the Northern Wei (obscured), and below the niche are donor figures of the Song dynasty (obscured).

In the upper arch niche is a statue of a dhyana Buddha. On either side of the nimbus on the niche wall is an attendant bodhisattva and an incarnated child. The niche lintel is decorated with honeysuckle motifs. Outside of the niche on the two sides are 13 molded statues of the Buddhas altogether, which were stuck to the wall. The arch niche below also contains a dhyana Buddha statue. All the four statues on the sides out of the niche are lost. On the walls are images of a nimbus and four attendant bodhisattvas.The niche lintel is decorated with honeysuckle motifs. Below the niche on the base of the pillar are two symmetrical images of tigers.

The upper niche with a Chinese styled city gate contains a cross-ankled bodhisattva, on each side of the nimbus on the west wall are two attendant bodhisattvas and two incarnated boys. Above the niche are lotuses. The wall outside the niche is decorated with nine moulded Buddha statues. The lower arch niche contains a dhyana Buddha statue, and on two sides out of the niche are three moulded Buddha statues. The niche lintel is decorated with flame motifs and it has a niche beam and pillars in bas-relief. There are traces of a row of donors along the edge of the niche.

Only a small part of the painted laterndecke motifs is preserved today. Only the picture of the naked children swimming in a lotus pond, the honey suckle motifs and a laternendecke motif of lotuses, honeysuckles and apsaras left (all are incomplete).